NHGIS crosswalks are similar to the U.S. Census Bureau's Relationship Files, but NHGIS crosswalks include interpolation weights, derived from advanced models. Each interpolation weight indicates the proportion of a source zone's characteristics that should be allocated to a specific target zone. We use these same weights to produce NHGIS geographically standardized time series tables.

Why It's Best to Start Small

To transform summary data from one census's geographic units to another's, it's important to start from the lowest possible level.

Let's say you'd like "harmonized tract data": multiple years of census tract data for spatially consistent tracts. So you obtained 1990, 2000, 2010, and 2020 tract data, and now you'd like to use a tract crosswalk to standardize the boundaries. But there are lots of data available for units smaller than tracts, and those smaller units fit much better within other years' tracts, so why not start with data from the smaller units? Doing so is consistently more accurate, and sometimes much more.

For example, there are thousands of cases where a single 1990 census tract corresponds to multiple 2010 tracts. This is especially common in fast-growing areas on the outskirts of cities, as in Figure 1. To tabulate 1990 data for the 2010 tracts in these cases, starting from tract counts requires disaggregating counts from the larger 1990 tracts down to their component parts, which can result in substantial errors. Disaggregation models commonly assume that population characteristics are uniformly distributed within source zones, resulting in inaccurately uniform distributions among the target zones. This is evident in the tract-based estimates of the 1990 Black population distribution in Figure 1, which indicate that this area was moderately well integrated. 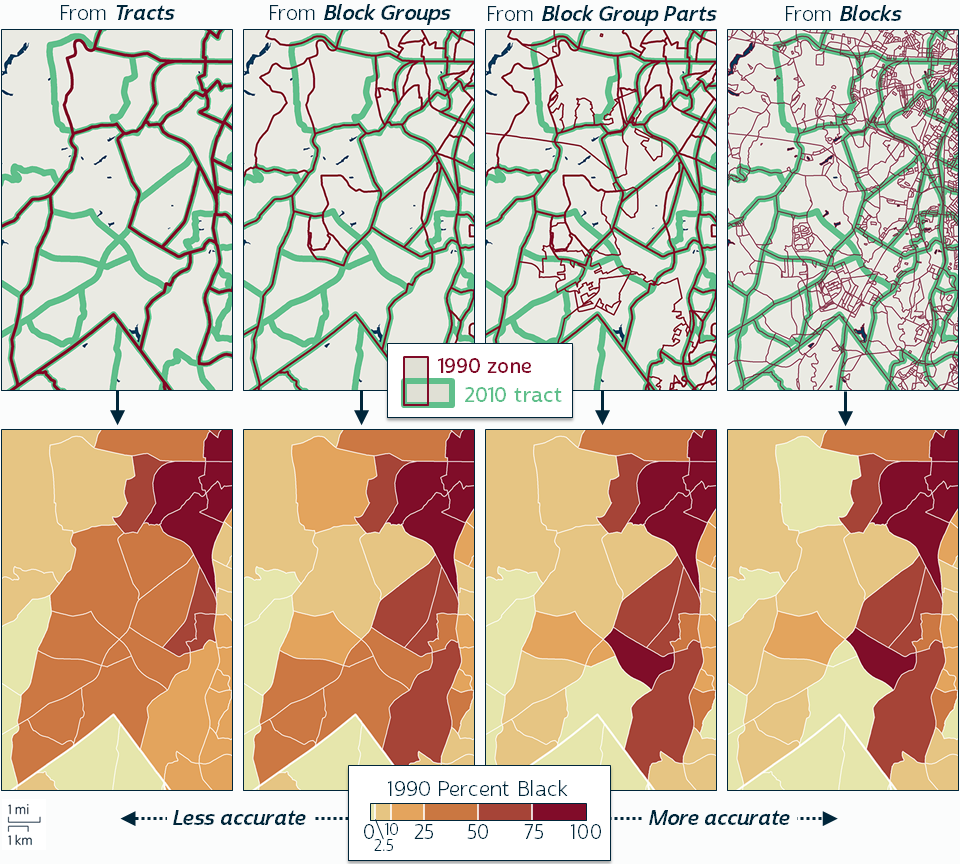 In this case, there is no need to start with tract data. The Census Bureau publishes many summary tables for lower levels, such as blocks, block groups, and "block group parts" (intersections between block groups, places, county subdivisions, and some other levels). Allocating data from these levels requires less disaggregation, and in many cases it requires only aggregation, resulting in exact counts for the target zones. In Figure 1, the allocations from the lower levels reveal that this area's population was in fact strongly segregated in 1990, with high rates of Black population in the eastern 2010 tracts and low rates in the western 2010 tracts.

Which source level is "lowest" depends on whether the data are from the full-count, short-form census or from a sample-based, long-form survey.

From 1970 to 2000, the decennial census used two questionnaires:

After the 2000 census, the Census Bureau stopped including the long form in decennial census operations and has instead collected comparable information through the year-round American Community Survey (ACS). The Bureau publishes summary tables from the ACS annually. To generate a large enough sample to report data for small areas, it pools 5 years of samples together, producing 5-year summary data.

*The ACS also provides data for many entities that are smaller than block groups, such as small villages and tribal areas, but unlike these areas, block groups cover the entire U.S. and are uniformly small, with no great exceptions.

For optimal accuracy, we recommend using:

There are some census and ACS tables that are not available for these levels (e.g., detailed place of birth), and there are some other data sources that provide data only for tracts or higher levels. To help with these settings, we plan to add crosswalks for some other source levels in the future.

How to Use the Crosswalks

In a block-to-block crosswalk, each record identifies a possible intersection between a single source block and a single target block, along with an interpolation weight (ranging between 0 and 1) identifying approximately what portion of the source zone's population and housing units were located in the intersection. These weights can be used to estimate how any counts available for source blocks (e.g., females age 75 and over, single-member households, owner-occupied housing units, etc.) are distributed among target blocks.

For example, to interpolate count data from 1990 blocks to 2010 blocks:

One difference is that crosswalks from block groups and BGPs include separate interpolation weights for different census counts, as laid out in the Technical Details section. To generate the weights in these crosswalks, we compute the proportion of each source zone's characteristics in each target zone based on block-level characteristics, using the block-to-block crosswalks. The separate interpolation weights are based on different block-level characteristics (total population, total housing units, etc.), enabling crosswalk users to choose the weights that are most suitable for their data of interest.

Finding source data for 1990 and 2000 BGPs through the NHGIS Data Finder involves an extra step. In NHGIS terminology, BGPs are a type of compound level. To find them in a selection window for Geographic Levels, you will need to click on the "Show Compound Geographic Levels" option in the upper right. You will then find BGP levels under the "BLOCK GROUP" heading.

Summary files for 1990 and 2000 use different versions of BGPs, each combining different sets of geographic units. The crosswalks use these levels:

In most cases, allocating data to 2010 counties, census tracts, or block groups will produce results that are directly comparable to tables from the 2011-2019 releases of American Community Survey (ACS) Summary Files. The Census Bureau generally makes no changes to its definitions of census tracts or block groups between censuses, and changes to county boundaries are also uncommon in recent decades.

There are a few exceptions:

We plan to extend our crosswalks in the future to incorporate these discrepancies and facilitate allocations to and from census units for any year since 2010 for anywhere in the U.S.

The crosswalks are provided through the links below as comma-separated values (CSV) files within Zip archives.

Each Zip file includes a "README" text file that describes the content of the crosswalk file in detail.

The interpolation weights in NHGIS block crosswalks are primarily based on "target-density weighting" (TDW) (Schroeder 2007). TDW assumes that characteristics within each source zone have a distribution proportional to the densities of another characteristic among target zones. For example, if a 2020 block intersects two 2010 blocks, one of which was 10 times as dense as the other in 2010, then TDW assumes that the same 10:1 ratio holds within the 2020 block in 2020.

The interpolation weights in the crosswalks from 1990 and 2000 blocks to 2010 blocks involve some more advanced modeling as documented in these pages:

To generate crosswalks from block groups and block group parts (BGPs), we used block-level data and the block-to-block crosswalks to calculate the proportion of each source zone's characteristics that were located in each target zone. The Python-based source code for the BGP crosswalks is available in this Github repository, which includes an FAQ with additional documentation.

Each crosswalk file is complete for the entire U.S. or for an entire state. State-level files include all target zones for the state as well as any source zones that intersect any of those target zones, including some source zones from neighboring states in cases where the Census Bureau adjusted state boundary lines between censuses.

Users interested in producing a complete set of data for a single state may need to obtain source data for both the state of interest and its neighboring states to ensure they have the required input data to allocate to all target zones in the state.

The block crosswalks and the nationwide BGP crosswalks can include millions of records and may therefore be too large to open in some applications.

There are two types of block crosswalk files, differing in the codes they use to identify blocks:

The block-to-block crosswalks include a single interpolation weight (labeled "WEIGHT") representing the expected proportion of the source block's population and housing units located in each target block. These are the weights used for geographically standardized time series tables.

The crosswalks from block groups and BGPs include multiple interpolation weights:

In crosswalks with 1990 source zones, the zone identifier fields may contain blank values. Blank values are given in cases where a source or target zone lies entirely offshore in coastal or Great Lakes waters. In these cases we are unable to use NHGIS boundary files, which exclude offshore areas, to determine relationships between 1990 and later census zones. (For censuses after 1990, we use block relationship files from the Census Bureau to identify intersections in offshore areas.) None of the blocks or BGPs with a "blank" target zone had any reported population or housing units. We include the records with blank values to ensure that all source and target zones are represented in the file.

Use of NHGIS crosswalks is subject to the same conditions as for all NHGIS data. See Citation and Use of NHGIS Data.